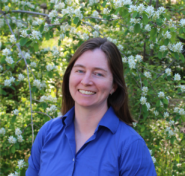 Leigh has worked for The Nature Conservancy since December 2007. Leigh’s work focuses on bringing multiple stakeholders together to achieve common goals in Forest Health, including: managing the Don’t Move Firewood campaign, working to improve the international biosecurity measures in place for solid wood packaging, and convening the annual Continental Dialogue on Non-native Forest Insects and Diseases. Her leadership of the Don’t Move Firewood campaign has led to its being widely regarded as one of the most innovative public outreach arms of The Nature Conservancy. Leigh earned her B.A. in Biology at Williams College and her M.S. in Wildlife Biology at the University of Montana in Missoula, where she studied the intersection of native wildlife and invasive plants.