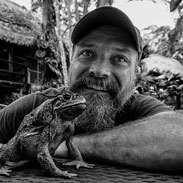 Dante is Vice President of the Center for Conservation and Research at the San Antonio Zoo.  Dr. Fenolio helps to coordinate both domestic and international conservation efforts to develop captive breeding methods for endangered species including a project in collaboration with the Chilean Amphibian Conservation Center.  He collaborates with colleagues at the Chinese Academy of Sciences, focusing on the cave biodiversity of South China and develops conservation strategies.  He also works with Brazilian, Chilean, and Peruvian colleagues to form conservation strategies for wildlife and forests in those countries.  Dr. Fenolio’s department is also involved in a consortium of researchers investigating the impact of the BP oil spill in the Gulf of Mexico on deep sea and pelagic communities in project “DEEPEND”.  His team also lead efforts to conserve imperiled species living in the Edward’s Aquifer and its springs.  In 2016, Dante published a book featuring his photography focused lantern fish and other animals which spend all or most of their lives in the dark called “Life in the Dark”. Dante earned his Ph.D. in Biology from the University of Miami, Florida.